Add kali repository to ubuntu and Debian based systems

Add this line to your sources.list which you will find at /etc/apt/sources.list. Edit this file with your choice of text editor or just echo this into the file in append mode as shown below.

You can also use text editor to add this line at the end of this file as shown below in the picture. 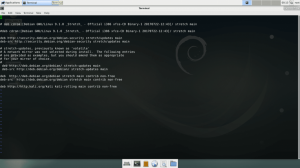 Now just save the file and return to the terminal and type in the following command in Terminal to update the repositories index.

At this point all the Kali Linux tools are ready to be installed on your system. You can simply go to https://tools.kali.org and list all the tools from there category-wise and install them as per your need. So for instance to install the top 10 tools of Kali Linux, we do:

And yes you will have Metasploit installed in these top 10 kali tools.

I just left out a part where you need to add the GPG key for package authentication. The only thing which will happen if you haven’t imported a appropriate GPG key is that it will throw some security warnings while installing software. You just need to hit Yes every time warning pops up. If for some reason it shows error while installing Kali Tools then you can try importing GPG key for repositories. You can just simply google for GPG key and import it.

If you are still bothered about security warnings then you can also disable the GPG checks by using [trusted] option.

The trusted option turns off the GPG check.

How to Brute Force Login Page – Brute Force Attack Tutorial
Life is Strange: Before the Storm May be Coming to Linux
Comment