If you go over to the Steam hardware survey page you’ll find out that over 98% of people game on Windows. This is one of the main reasons why developers aren’t making Linux exclusive games or even porting their games over to Linux. So why are people not gaming on Linux? or why aren’t developers making more games for Linux? There are plenty of reasons. Let’s discuss them one by one. 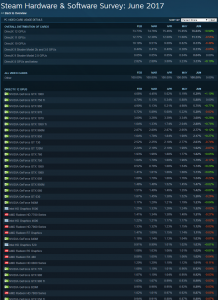 DirectX is a collection of APIs (Application Programming Interface) for handling game programming and multimedia. In simple words, DirectX helps developers to make games easily. Unfortunately DirectX is not a cross-platform API, it only works with Windows. So DirectX isn’t available for Linux, OpenGL (Open Graphics Library) is used in its place which is a cross-platform API. DirectX has more support than OpenGL. I’m not talking about wiki pages, I’m talking Microsoft sending their coders to game developers to work with them. Every major game engine is built on DirectX because the level of support that the companies get. DirectX also gets updates more frequently and usually sets the bar. Since Microsoft hasn’t made DirectX open-source, it is harder to develop a game for Linux.

Both nVidia and AMD have graphic drivers available for Linux. Although nVidia drivers are proprietary and most of the Linux userbase believes in free software. There’s been a love and hate relationship between Linux users and nVidia for the past couple of years. On one hand nVidia proprietary drivers are the best performing drivers available for Linux and on the other hand nVidia refuses to work with the open-source community. Linus Torvalds has termed nVidia as “the single worst company that the open source community has dealt with”. AMD has open-source drivers, but they don’t work as well as their nVidia counterparts. AMD is also very happy to work with open-source community and it can only get better.

Linux people tend more to believe software should be free – as in free speech. Most of the Linux users don’t usually game and if they do they can dual-boot Windows with Linux and play games there.

Windows Does its Job

Say what you want about Microsoft as a company and Windows as an Operating System, but their OS does whats expected of it. Most of the gamers don’t care about itricacies of their operating system. They just want to play video games. Windows provides a ready to go gaming machine, which is easy to maintain. Installing drivers on Windows operating systems is super-easy. For developers, the DirectX support is an immense help. So why should you game on Linux when Windows does its job and does it well.

As of Last year top 42% of the Steam games were available on Linux. More companies are porting their video games over to Linux and there are also some exclusive Linux games available. The big companies like Ubisoft and EA still just ignore Linux as a potential audience. Although other big companies like Valve and CD Project Red has been a huge asset for Linux gaming scene by making their games available on Linux. Valve has almost all of their games on Linux OS. Other popular games that are available on Linux include – Civilization, Borderlands, XCOM, Middle Earth, some versions of CoD, Grid and much more. Despite all of this increase in games on Linux the playerbase according to steam hardware survey is still low. Here’s hoping that it increases and more studios release their games on Linux.

Why You Should Give DuckDuckGo a Try. Alternative to Google?
How to Reset Linux Password – Debian and Ubuntu Based System
Comment